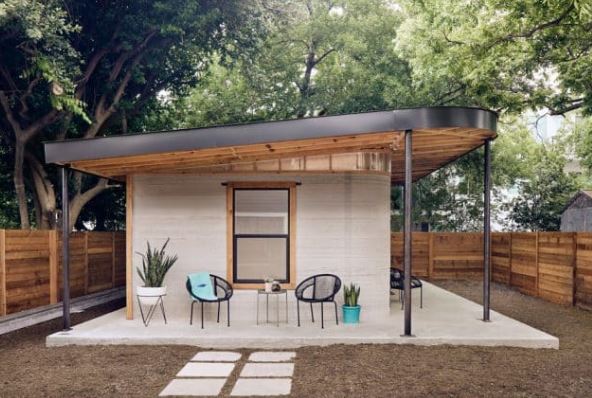 Ingenuity in Austin, Texas leads to housing for impoverished families in Latin America

Over the past year, in a lab in Austin, a team of engineers and materials scientists has tweaked and tested the design of the “Vulcan II,” a massive, 33-by-11-foot machine that can 3D print the frame of a small house in less than a day. Later this year, it will begin printing a neighborhood of more than 50 homes.

The new neighborhood–the first of its kind in the world–will be built in a semi-rural part of Latin America for families who earn less than $200 a month. “We’re bringing very futuristic technology to the families that need it most first,” says Brett Hagler, CEO and cofounder of New Story, a Silicon Valley-based nonprofit that is working with Icon, the Austin-based construction tech company that developed the new machine.

New Story considers itself the “R&D arm” for the social housing sector; when the first community is constructed and proven, it plans to begin to share its learnings for governments and other nonprofits to use. “This next stage will be getting these machines into the hands of as many other organizations that can help end global homelessness as possible,” says Hagler.

The Christianity Today Board of Directors has unanimously elected Dr. Timothy Dalrymple as its next president and CEO. He will begin his new role May 1, 2019. Dalrymple’s selection follows a nine-month nationwide search involving over 150 potential candidates.

The president-elect was raised in California, where his father served in several pastoral roles. He began to preach and teach at a young age. He was also a national champion gymnast and saw God’s faithfulness in victory and defeat alike. He took his passions for ministry, learning, and athletic achievement with him to Stanford University.

Commenting on the enthusiasm of the board for their president-elect, board chair Eugene Habecker said, “Tim comes to CT at a strategic time. He has a remarkable opportunity to build on the foundation put in place by retiring president Harold Smith.” He added, “Tim brings the requisite skill sets to help lead CT to the next level, combining those skills with a vibrant evangelical faith, the heart of a shepherd, and the attitude of a servant.”

WASHINGTON (CNS) — Nonprofit and religious leaders, including the chairmen of two U.S. Conference of Catholic Bishops’ committees, called on Congress to repeal a provision in the 2017 tax cut bill that taxes religious and nonprofit organizations for the cost of parking lots and transit benefits provided to employees.

In a letter March 1 to Democratic and Republican leadership on the House Ways and Means Committee, the religious leaders cited the conclusion of an Evangelical Council for Financial Accountability official who determined that the provision “effectively creates an income tax on churches for the first time in U.S. history.” The leaders urged Congress to act soon because the affected organizations will begin filing tax forms and paying income tax on parking and transit benefits. The deadline for filing forms is April 15, which is Tax Day.

Religious leaders said that tax policy experts estimate that the provision will “extract nearly $1.7 billion in taxes from the charitable sector over 10 years.” “The amount extracted is likely to grow,” they wrote, “as houses of worship and nonprofits are forced to shift resources form serving their charitable mission to dealing with paying this burdensome federal tax.”

LifeWay Christian Resources, the largest Christian retail chain in America, plans to close all 170 stores this year and shift its offerings entirely online.

Overall, sales at Christian retailers declined 3 percent in 2018, according to research by The Parable Group. Even though the dips aren’t as dramatic as a few years before, it doesn’t make up for year after year of losses. Nearly two-thirds of Christian retailers said the future of their industry was a top concern—second only to their own declining margins.

“The decision to close our local stores is a difficult one,” said acting president and CEO Brad Waggoner, who is succeeding longtime LifeWay president Thom Rainer. “LifeWay has developed close connections with the communities where our stores are located, and we have been honored to serve those communities. We will continue serving local congregations as they meet the spiritual needs of their neighbors.”

Last week was spring break in many communities across the US – often a time for people to take a break from school and enjoy their free time. But the Newman Catholic Center at Eastern Illinois University (EIU) had “alternative” spring break plans that involved helping others through service projects across North America.

Doris Nordin, campus minister at the Newman Catholic Center, said Alternative Spring Break has been around for many years now. “This is the 28th year that we (have done) it, so we have a tradition of using spring break as a time of service,” Nordin said. The center puts together leaders – typically EIU students – and trains and meets with them to make sure they are prepared to lead in the projects they will take on, she said.

The opportunities afforded to EIU students are just a few of hundreds of service-oriented spring break alternatives offered at schools and universities around the nation, and they represent the value of giving back that is becoming increasingly emphasized by both secular and sacred institutions.

Madison Ley, a senior elementary education major at Eastern who went to Mexico said that this year’s trip was her second time to participate in “alternative break.” Ley said, “The whole point behind going to an Alternative Spring Break is to devote one’s time in ways that help multiple people and to get a meaningful experience out of it.”

Chick-fil-A serves up fish sandwiches in observation of Lent

Chick-fil-A is serving up a fish sandwich in honor of Lent, which began earlier this month. The chicken chain’s Fish Sandwich is on sale now at select restaurants but will be gone by the time you say “Fish-fil-A” – it is available for the Lenten season only. The starting price is $3.55.

Chick-fil-A started offering the sandwich in 2016, but it is by no means the only non-red-meat/non-poultry option on the fast-food market. The Filet-O-Fish sandwich offered at McDonald’s has been on the iconic chain’s menu since 1962, and although it is sold year-round, the company reports that nearly 25% of annual Filet-O-Fish sales occur in the weeks leading up to Easter.

Also joining the Lenten line-up at Chick-fil-A are the Deluxe Fish Sandwich, with a starting price of $4.15, and boxed two- and three-count fish entrees and meals, served with Waffle Potato Fries, for $3.09 and $4.59, respectively. Get yours by April 20, the day before Easter.